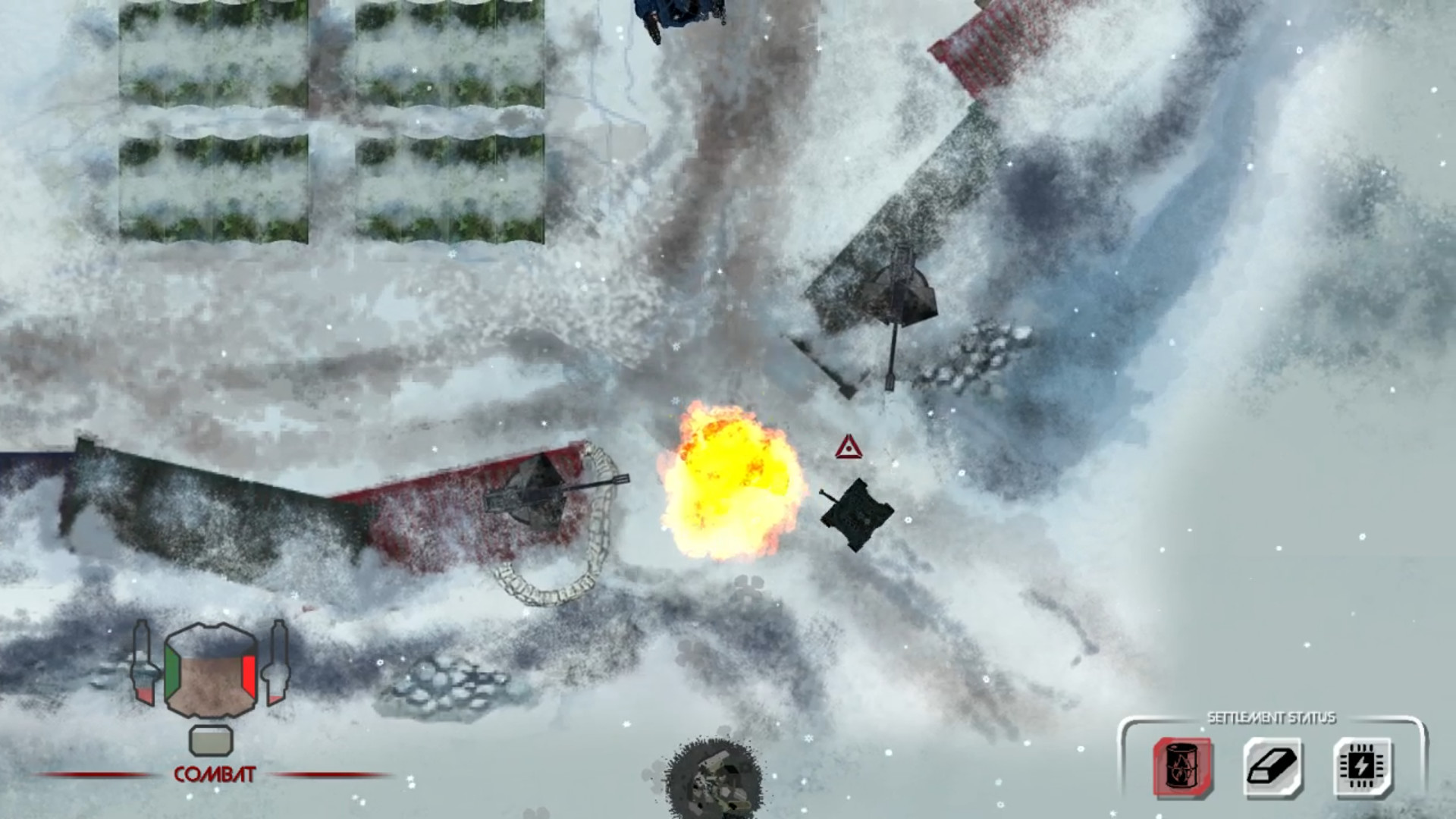 Aegis is a 2D mech action shooter where you play as the last defender for a small settlement. Through exploring the frozen wasteland, you will gather vital resources to help your people build the Atmospheric Cleansing Unit, battle hostile scavengers, and find new parts to upgrade your ATEX Battlesuit. 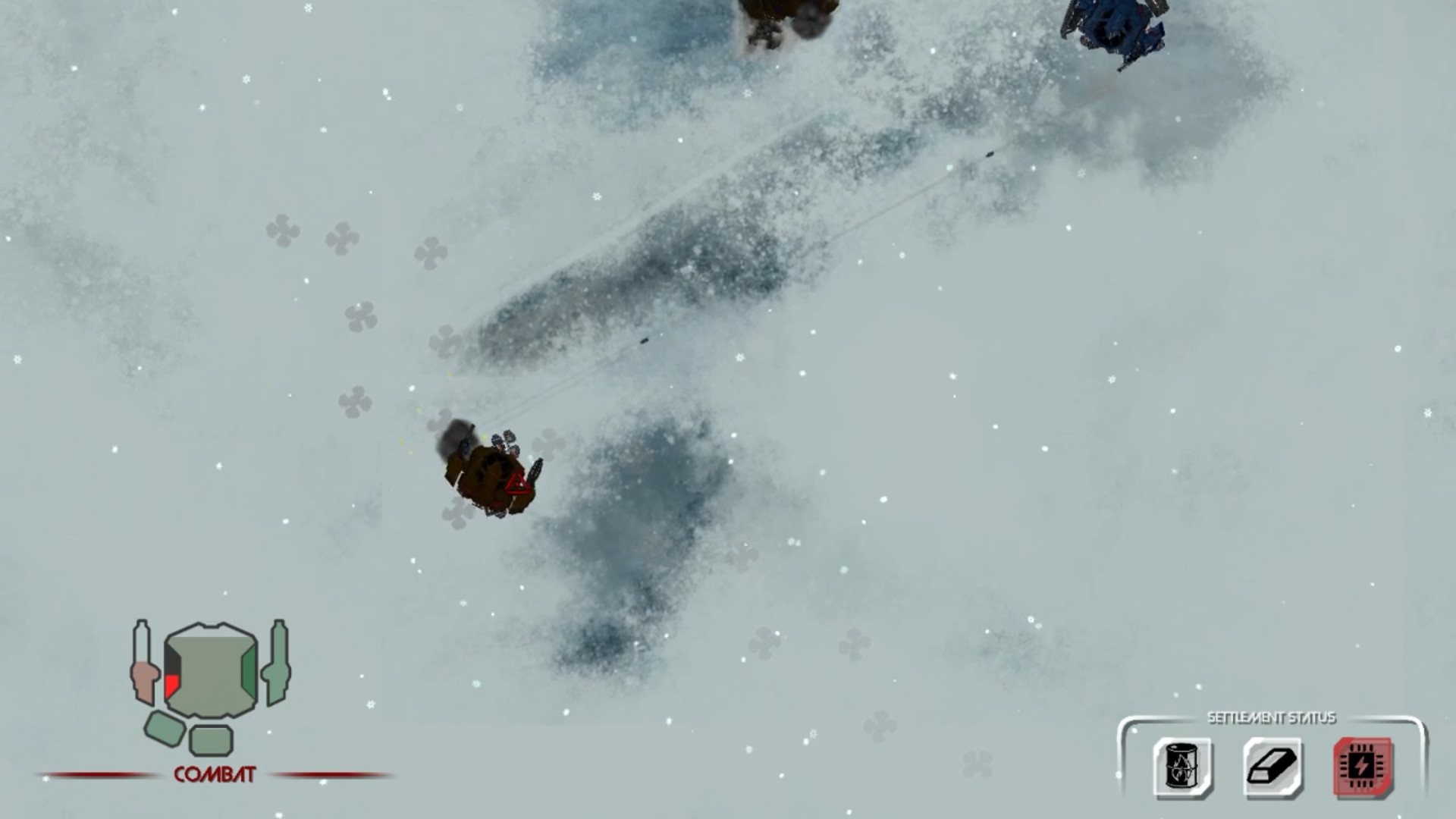 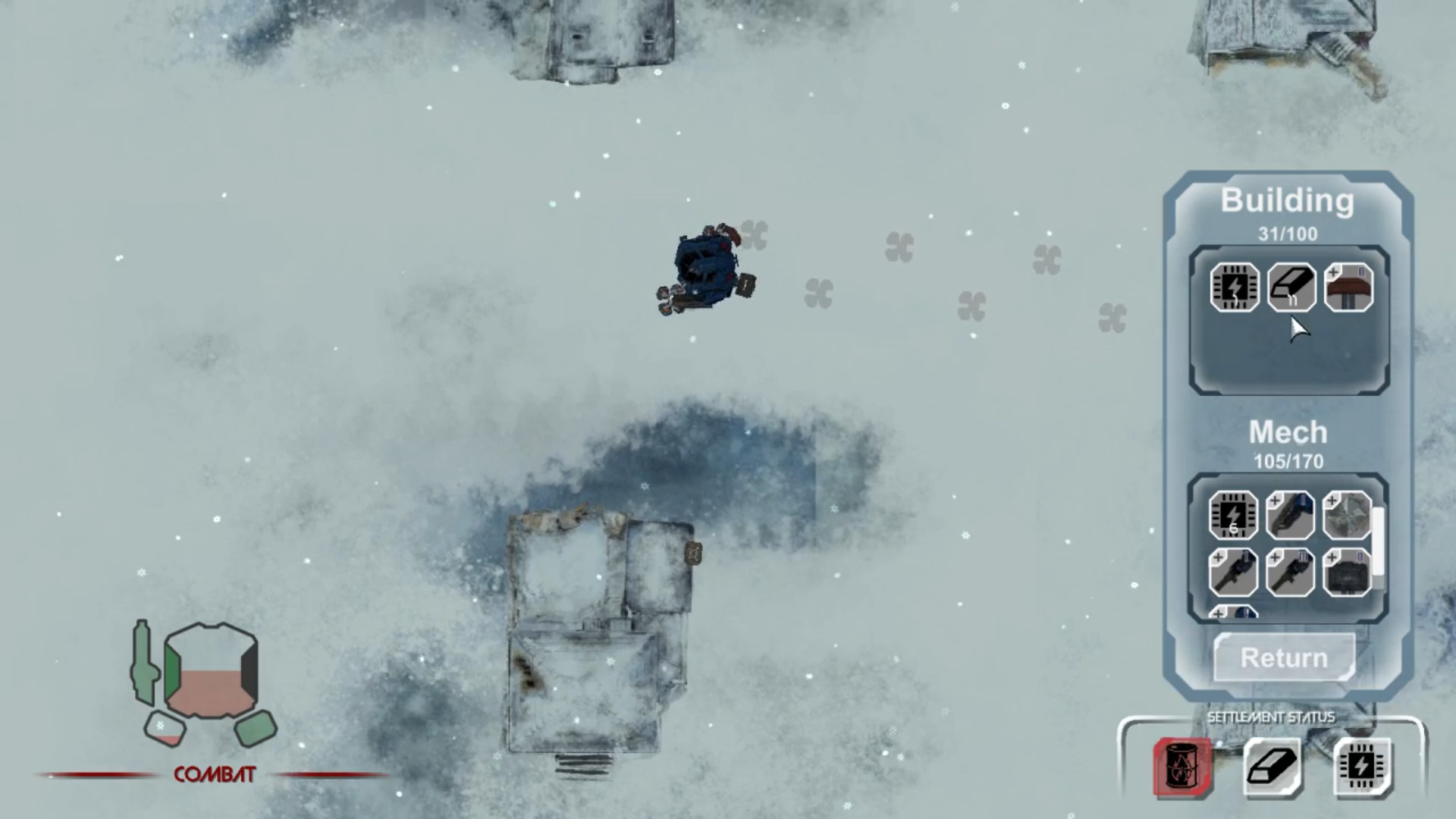 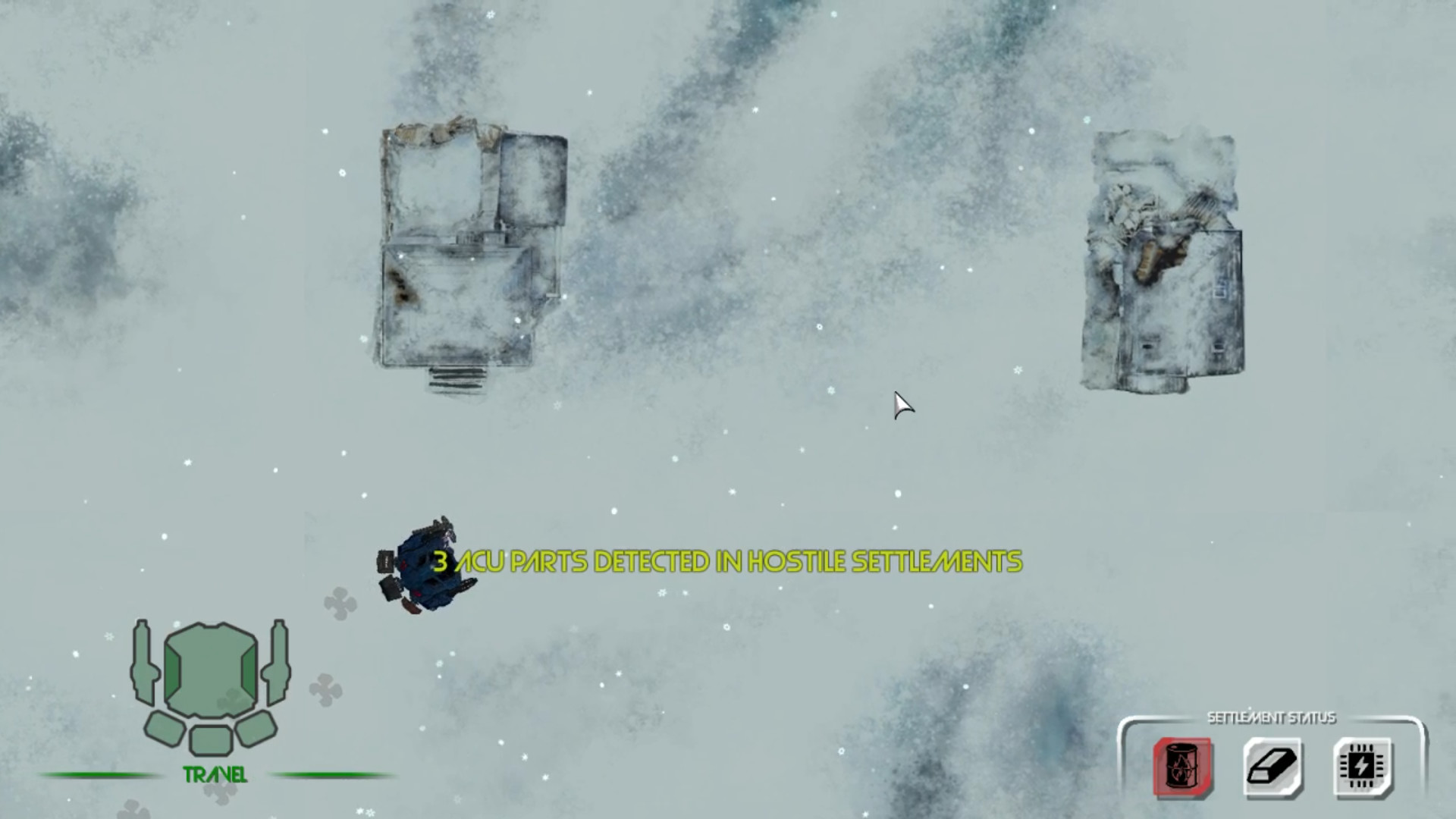 
It's the end of the world. Nuclear winter has taken hold of the planet. All seems lost. Except that your settlement has the knowledge to build a terraformer to fix the planet. The only thing is they need ACU parts and resources to do this. But it's no cake-walk. Humanity is scattered around and everyone is at odds with eachother, clinging to the little resources they have. And your settlement only has one mech, so good luck. You're going to have to take what's needed to save the planet by force.

I led off with the setting because it's just awesome. The soundtrack and the ambience in the game reflects the above stark reality. It feels lonely with quick bursts of adrenaline when fights happen. And the fights are deadly. You need to be very careful when fighting other mechs and raiding bases to not lose valuable equipment or die.

The ambience and difficulty are great! At $3, it's a great value for such a niche experience.. This is fun top down Mecha combat with decent story behind. I must admit to never before having played any "Roguelike" games. It was the fact that I kept reading about the genre of games and seeing how popular they are that I was keen to finally try one.

When I first installed the game I ran into some problems - the text was not appearing. It turned out that this was due to my desktop running in 4K. I got in touch with the developers via Twitter and they were very quick to reply. I lowered my desktop resolution, restarted the game and was able to access the Graphics Settings. I chose to run windowed and was then able to put my desktop back to 4K. Since this game is Early Access I am sure that problems like this will be fixed before it gets a full release.

When I started my first game it took me a little while to realise that I had to use W,A,S and D to move my mech. I was clicking with the mouse thinking it was more like Cannon Fodder to move around. The in-game help text is minimal and, at first, I found this to be a problem. However, it seems that I have fallen foul of a common, modern-day problem: I expect everything to be spoon-fed to me. When I was chatting with the developers - they said that a lot of feedback they have received praised the discovery element of the game. Once I engaged the part of my brain that was prepared to figure stuff out then things started to make sense. This leads to a sense of achievement that I have not experienced in gaming for a long time - probably since the 8-bit days.

At the moment I have only played the game for a few hours and I still have not managed to complete it. I am probably spending far too much time just getting more resources and taking them back to my base. I am still learning new things but my main tactic is to engage an enemy and then lure them back towards my base where my defences will destroy them.

I recommend this game - particularly if, like me, you are new to this genre. I can't compare it to other "roguelikes" since this is the first one I've played. Feel free to recommend others I could play for comparison!

Oh, I also purcahsed the OST and love the 80's synthwave vibe to it!

. A mech sim that reminds me very much of the type of games i used to play on my Amiga 20 years ago. It doesn't try to do too much, but the things it does feel just right.

It's a tiny bit rough around some of the edges, but it's still a lot more polished and smooth than many games that cost 10x the price asked for Aegis.. Cool concept, but flawed execution.
Can't proceed in the game, the base is missing the parts required to receive resources.
Clunky controls don't help either.. This is literally the worst game I have ever played on steam. Theoretically you command a mech who collects resources and brings them back to base to construct a better colony. In practice, the design choices are so bad you'd be forgiven for just wanting to burn the colony down yourself. The controls are awkward and it is more common to run out of ammo than health, leading to a really dull end to a battle defined by wonky controls.. i left my keys in my car. The controls interface ruins whatever hope this had to be a good game. (Also, this game entirely lacks any means of changing the control scheme, which every game should include.)

This is a "survival game" where you basically need to loot buildings to get supplies that your base constantly consumes. The problem is that you get supplies by clicking on buildings (sending out your drone), then having to shift-click on a resource in a window that pops up then click the button to gather that resource... without pausing the game.

Also, I don't really care much about graphics, but when I can't tell the difference between what's apparently the only important part of your base and some decorative grey smear on the floor, to the point where I had to quit the game and look in the forums for where my base was supposed to be, there's a problem.

By far the WORST aspect of this game, however, is that it's basically a game of clicking through menus while under attack from off-screen enemies that kill you in one hit all the time, but the game just flat-out ignores your clicks 90% of the time. Plus, you have to do things like move parts you don't need into the "recycle" box and click the recycle button, but the "show info" button is larger than it looks, while the actual item button is smaller, and if you don't click and drag to the EXACT right place, the whole menu freezes, forcing you to abort back out, recover your drone, send your drone back out, and then restart the process over again. WHY is all of this based upon mouseclicking and dragging when this game can't even get mouse controls right?

You hit space to enter "combat mode" (which makes you move half as fast for some reason) which means that clicking fires your weapons (if you have any), but the direction they fire is only VAGUELY guided by where you are clicking. The camera is controlled by where your mouse is pointing, too, so aiming at an enemy means you can't see anything around yourself. Also, you can't tell when you are turned too far to the left or right to aim properly until your shot is fired 30 degrees off course. Most weapons have a reload time of at least a second, so enjoy the massive frustration of missing because the weapons hadn't aimed in time (their traversal rate to follow your mouse - and hence the target - seems to be randomly determined at any given second). Also, did I mention you can permanently have a weapon destroyed, or even your whole mecha destroyed in one or two hits while you're still figuring out why your guns are firing backwards?

Yeah, that's right, if you manage to get any weapons worth a damn, they get blown away in the first attack by an enemy you didn't see because the camera controls are so floaty and so ignore your intentions.

Apparently, there are some bases that have something called "ACU"s that are your main goal, but if you go anywhere near them, about 20 enemies swarm you, each one of which is capable of killing you in 1-2 shots, and while you're going off to do that, the other enemy bases will take it as open season to steal all your resources from your own base (because they can do that).

Still, this was a game that I spent more time fighting the controls than the enemies, overall.. At $3 this a steal.

Find the "squirrel jackhammer" for some real fun.

Well worth the ending! Just wow.. Resource scavenging and getting anihalated the second you see more than enemy, with a camera that won't stay centered, this game is reeeeaaly boring.