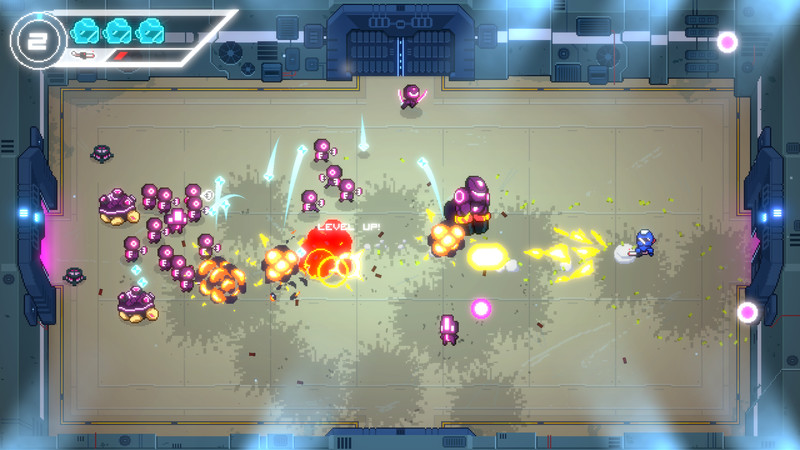 Galaxy Champions TV is a brutal top-down closed arena shooter game inspired by the classic arcade game Smash TV. Get powerful weapons and power-ups, kill huge amount of enemies, level up, unlock upgrades and beat all the bosses to become the champion of the most violent TV show of all time! Are you ready to become the Champ?! 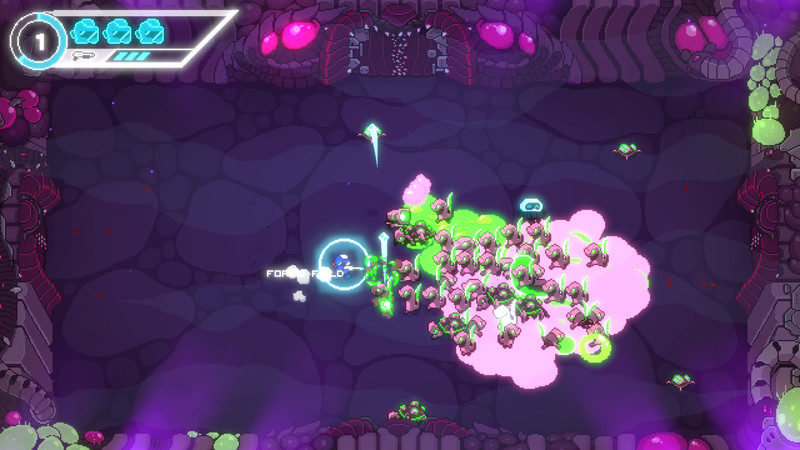 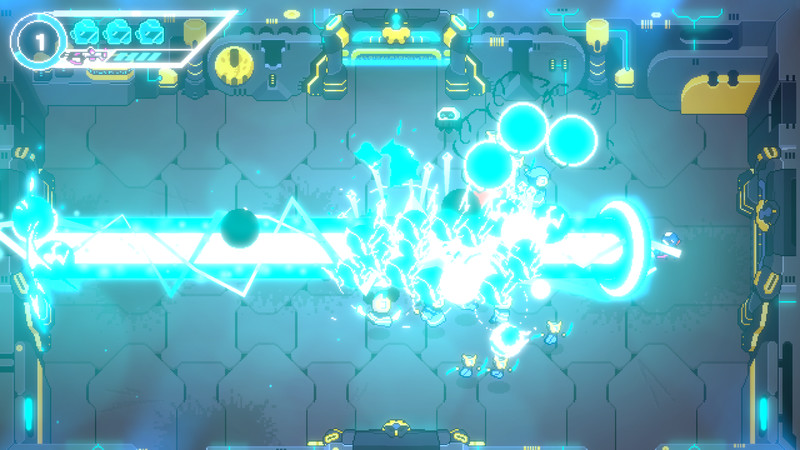 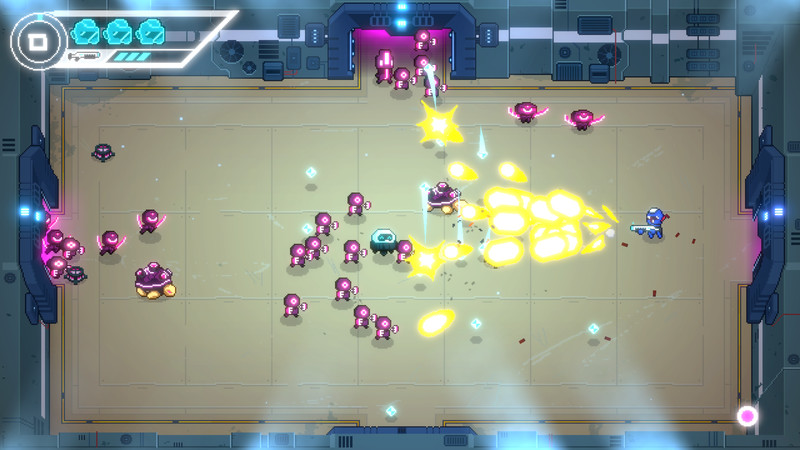 
At AU$9.95, Galaxy Champions TV is worth the price - but is noticeably overshadowed by it's predecessor Super Smash T.V.

The planets (levels) and upgrades are fun, but there is only 3 of the former and not a huge variety of enemies nor bosses. Late-game gameplay feels like you're just spamming forward towards one Loot Bot onto the to the next. Also absent is any of the humour of the Williams Entertainment classic - which, withstanding Galaxy Champions TV is it's own game, would be okay if it was substituted with something else that connects you to the world other than the solid gun play.

Some minor additions, like looping in the 'Campaign' mode and other novelties would not go astray to keep my attention.

Solid game, but needs more content and to reduce the bullet spam scaling.. This game is rad. I'm a big SMASH TV fan and this game totally recreates the vibe with updated graphics and some cool mechanics.

Found out about this game from googling how to do SMASH TV mechanics in gamemaker 2 studio and stumbled onto this game and got super excited.

Totally worth the 6 bucks or whatever and I'd love to pick the developers brain on how to get started doing these type of effects in gamemaker.. I will write this in two languages. If i'm not totally clear in english is because my first language is spanish

Ok. I played this game for many hours before its official release on Steam, because i found it on Twitter many months ago, and the gaming experience has ALWAYS been positive, no matter which update i was playing. In three words, Galaxy Champions is: Fast, adrenalinic, and funny

- It's really hard. It's a challenge for the player.

- It's really funny and addictive.

- The artistic style is really beautiful, and the different animations are perfectly done.

- The game is really cheap, even without the 15% discount with which I bought it

- The music is so repetitive

- The kind of magnet effect the the player has, sometime makes you change your weapon, even if you don't want to. It's something that previous versions didn't have, and i think that this change ruins a little part of the gaming experience.

- Having the possibility of respawning 3 times takes away that difficulty plus that, along with the fast gaming style, i think that characterize the game. Having the possibility of respawning is not a bad thing, but it would be much better if this would penalize the player in some way. In my opinnion, letting this as it's right now would be a negative point for the game.

- The game becomes really repetitive with the passage of the hours. To avoid this, the primordial thing to do is to add many more upgrades among which the player can choose, and that they change the gaming style, because, as every time you replay the game the enemies are the same, and they appear in the same order in every world, a big ammount of upgrades would give Galaxy Champions a lot of extra hours of game.

I can't give Galaxy Champions a puntuation because i think that i have to play it so much more, but for the moment, i'm really enjoing it <3 thank you for this game, aQuadiun.. Holy♥♥♥♥♥♥is this game a ♥♥♥♥ing blast to play through, but it does have quite a few problems.

First off: it gets pretty repetitive. It's like a roguelike, but it doesn't have any randomness, so it gets pretty old. The music is also pretty limited/repetitive, but for what it has, it's pretty good. It is completely worth it for its price, though.. Though fun for a bit, the level of variety is way too low. Enemy types are few, and powerups are limited. The game is inexpensive, but that just does not justify how small of a game it really is underneath its pretty graphics and initially fun playthroughs. In addition, it isn't like most modern roguelikes in that you don't get small progressions between runs, such as skill trees or new items. This makes each run feel pretty meaningless, especially with how shallow enemy types and items are.. Edit 5/12/19: Changing review from thumbs up to thumbs down after 2.0 update. I do not like it at all, basically completely re-did what was a great game and made it worse by completely re-doing the main game, while it's nice to see more stages and a longer game I hate the new level-up system and there's no more scoring as well. I'd rather have an older version.

This is a Smash TV/Robotron 2084-type game, but more like Smash TV in it's storyline. Based on my first play of it, although I'm not a big fan of 8-bit/pixel/retro graphics in new games these are fine, and even if you've never played games like this it's easy to pick up and play and there's a tutorial to help you get started. There are some nice twists such as being able to choose which powerups you want after each level, and using gamepads is simple with no setup required. With my gamepad controls are easy with dual sticks or buttons, although with dual sticks for shooting there was a little lag at times in firing and changing directions.
If you like Smash TV, Total Carnage, Robotron or similar games give this one a try as it's quite similar, but it's also easy to pick up and play if you're unfamiliar with the genre. It's worth a shot if you're into this style of game.. At AU$9.95, Galaxy Champions TV is worth the price - but is noticeably overshadowed by it's predecessor Super Smash T.V.

The planets (levels) and upgrades are fun, but there is only 3 of the former and not a huge variety of enemies nor bosses. Late-game gameplay feels like you're just spamming forward towards one Loot Bot onto the to the next. Also absent is any of the humour of the Williams Entertainment classic - which, withstanding Galaxy Champions TV is it's own game, would be okay if it was substituted with something else that connects you to the world other than the solid gun play.

Some minor additions, like looping in the 'Campaign' mode and other novelties would not go astray to keep my attention.

Solid game, but needs more content and to reduce the bullet spam scaling.. I think it's fun for a little while, but it's awfully repetitive. The mechanics are fun and all, but there really is not much to do. I would say this is kind of like a rogue-like game but worse because of how few items there are and how little variety the game has. Games like The Binding of Isaac: Rebirth and Enter the Gungeon are much more feature-packed and have many more bosses & enemy types. 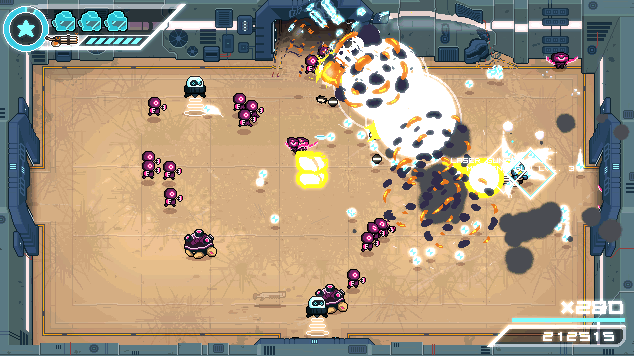 Thank you so much for the feedback and suggestions on Community Hub! We hear you and here it is the update 1.0!

Thank you so much for all the feedback and suggestions, We took all of them in consideration and now we are happy to announce that we are already working on Mega Update 2.0! More level, new world, new boss, skill tree system and more is coming in March (hopefully :P)!

We are very happy to announce that the Galaxy Champions TV update 2.0 is now available!! :D
Thanks to all of your comments, suggestion, cool ideas and support, we were able to improve the game! SO THANK YOU! Hope we did a good job! :P