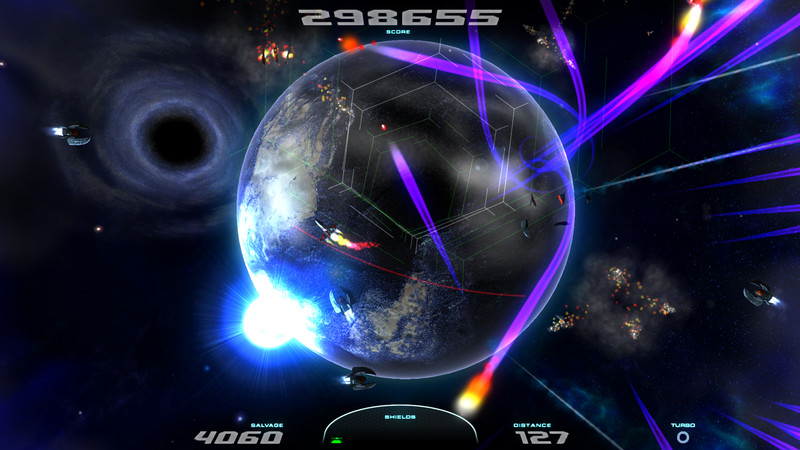 
Heckabomb is a twin-stick shooter for Windows. Works great with any controller. Supports mouse+keys play too. It has varied levels based in a circular arena and a host of upgradeable stats including bullet spread, rate of fire, turbo boosters and magnetic collectors. There are six varied add-on weapons too, including a chain-lightning gun, bullet-reflecting satellites and a rapid-fire swirly thing! (a legal requirement of any arcade shooter) Loads of different of enemies, including huge boss warships, missile batteries, tractor beams and a deadly enemy ace pilot will challenge your arcade reflexes and endurance.

Your planet is dead


The Heckabomber is a doomsday weapon, the only thing that survived the destruction of your home planet by the alien armada. Loaded with devastating planet-destroying bombs, you'll fight across the Universe. Seek out enemy worlds to obliterate, crush their defenders, crack their planet and harvest the remains for construction materials to upgrade your ship and continue your rampage.

Every second level you'll race to harvest asteroids before the blast wave reaches you from the planet you just blew up!


After charging up on ship upgrades, you'll take on aggressive enemy ships, crash through their defensive lines and try to get close enough to their planet to drop a single, devastating Heckabomb onto it.

Enemies come in various shapes and sizes from tiny fast-moving divebombers to massive lumbering tractor-beam transports that'll try to pin you down for other enemies to shoot.


Every 10th level, you'll face increasingly huge enemy Warships. Each one carries a unique bonus upgrade that you can only get if you choose to engage the Warship rather than steer clear of it's deadly weapons and fighter launch bay.


In Hardcore mode you get no continues and enemy accuracy, rate of fire and bullet speed all increase substantially. One life only, extra challenging fights, vie for a place on the elite hiscore table.


Casual mode unlocks when you complete just one level of the main campaign. It offers a lot less challenge and a lot more salvage loot, making for a relaxing shoot-em-up ride up through the game as far as the first Warship encounter. Practice your moves in relative safety, or just watch the pretty explosions.


Unlocking the bonus Survival Mode gives you a huge upgrade budget to customize your ship just once then hurls you into an endless battle against increasingly ferocious odds and a limitless armada of enemy Warships.


Face the elite enemy ace pilot in the campaign and you'll unlock the bonus Duel Mode where you can challenge the ace alone (with his 5 elite henchmen... hey, he is a bad guy!) a09c17d780 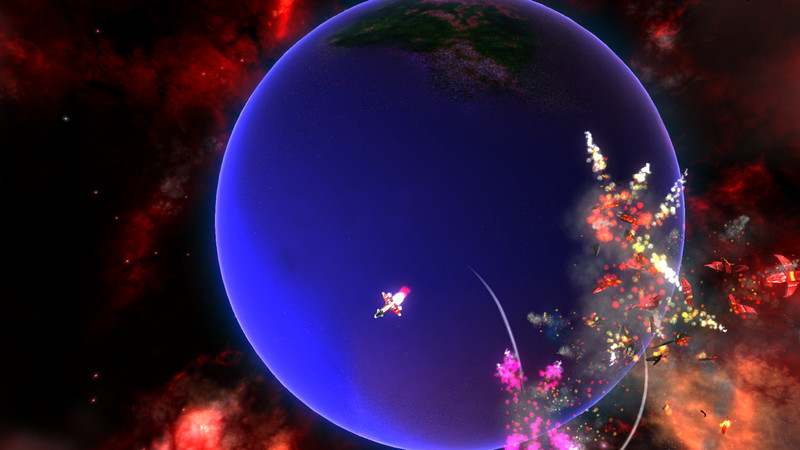 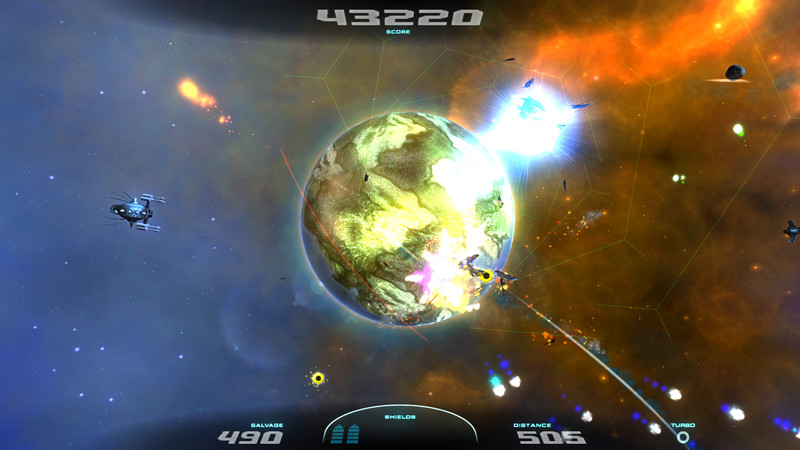 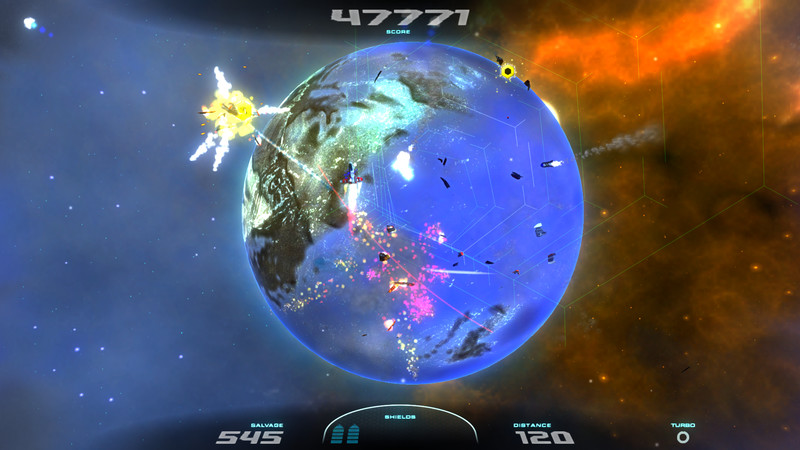 
An okayish twin-stick shooter. Like you play 3-4 levels, then you're like "Okay" and remove the game. Nothing spectacular. Better than the average low-cost segment though. Gaben, add | ~ | button for once!. The 2D space shooter has a long arcade pedigree, going right back to Asteroids. Heckabomb is clearly a proud descendant of that line, but is rather too arcade-like for a modern PC game.

It may seem odd to chastise a game obviously trying to be arcade-like for succeeding too much at it, but some of the throwback elements of the game are clearly retrograde steps. For instance, Heckabomb puts a lot of emphasis on a numerical score, giving it pride of place at the top of the screen, and rewarding certain in-game feats with score bonuses. Most gamers in my own circle, these days, rate their play by progress or achievements, and pay no attention at all to a numerical score -- I know that I don't even glance at high scores anymore.

Beyond a few additional play modes (Survival and the like, none of which couldn't really have been unlocked from the start) or the ability to start from a higher level Heckabomb doesn't offer any form of progress -- every game is like a fresh quarter in the machine. There's an upgrade shop (with balance issues; some upgrades are downright traps) but your upgrades are tied to your playthrough, and vanish with your destruction. This gives the game no sense of long-term reward. It's more akin to an arcade machine that offers the same experience to each new player than a modern PC game that rewards investment of time and development of skill.

Beyond the "arcadiness" issues, which, for better or worse, were clearly intentional, Heckabomb has some small problems. The balance issues with the upgrade shop have already been mentioned. More importantly though, the devs fell into a graphical trap that afflicts some space games. Game devs sometimes see pretty pictures of nebulae, and realize that space doesn't have to be a boring black starfield. Space can be colourful and interesting! So they fill their spacebackround with exciting, vibrant colour! That same excitingly coloured background, however, can camouflage enemy shots that you would like to avoid, unless the graphics are carefully managed to prevent this problem. Heckabomb does not succeed at avoiding the problem, and, in the chaos of lots of shooting enemies on-screen at a time, certain types of enemy fire can be completely lost against the background.

There is a good deal of polish in Heckabomb. but its flaws and odd throwback mentality make it a poor choice compared to a more contemporary take on the same style of gameplay, such as Space Pirates and Zombies.. After purchasing the game I can safely say that I regret buying Heckabomb.
Which is quite a pity for me as I would like to see the Indie developer who made the game to succeed and make other games.

So If you want him to succeed then you could always buy the game just to support him.
Anyway I\u2019ll get back on topic and tell you why I think the game is bad.


When you first start the game it drops you right into the first mission. I\u2019m ok that there are no cutscenes when you start the game but I would have liked to see the controls before being shoved in to the game.


This is one of my smaller gripes though.

Here are the other reasons why I don\u2019t like the game.


#1 The controls feel a bit unresponsive. It\u2019s just a little, but this is the type of game were you need to be super accurate to survive the enemy waves it throws at you.

I was using a controller by the way, but I have been as accurate in other games while using as much skill in them as I did in Heckabomb.

#2 The screen gets horribly cluttered at times. This is not good, as some enemies shoot blue tipped missiles at you.


These are extremely hard to see as they blend into the background.

Many times I didn\u2019t see the missile until I crashed into it while I was dodging the harmless asteroid chunks that where left over.

#3 Asteroids are OP. The bigger asteroids are way too fast, have more health than they need to and spawn way too much.


One of them tanked enough bullets that it smashed into me and taken off 2 and a half of my shields.
I only had 3 shields at the time.


The enemy ships in this game can only take half a shield off at the very most, whereas asteroids can kill you in two hits.
Shields aren\u2019t just shields in this game by the way, they are your health.


So once you run out of them, instead of being shield-less you die.

#4 The super bomb is underwhelming. In games like Beat Hazard and Waves the bombs will blow up the entire screen, whereas this one will explode like it\u2019s afraid of being too big and loud for its own good.

I regret spending my in game money on the Super Bomb at all when I could have purchased fire rate upgrades instead.


#5 Unfair enemies.
On one of the levels there are these space landmines that cannot be harmed until they activate and come after you.


And when they do they are far too accurate, can take way too much damage and also take 2 and a half shields off.
Which makes them the second thing that can kill you in 2 hits.

Both the mines and a big gold asteroid I found would reflect your bullets back if you shot them.

I had no way of knowing this, other than by finding out first hand. I am ok that the asteroid reflects bullets, but I\u2019m not ok that the mines reflect bullets, as they are already too deadly.


Something I can give the game praise for is its soundtrack.
It\u2019s quite unique and sounds great. But a great soundtrack does not make up for poor or lacking gameplay as it is the case here.


That\u2019s all I have to say.
So now you can decide if you want to get this game or not.
. You must play this game.. Heckabomb is a funny game, and contains all the good elements of the arcade games of the genre.

The visuals are not impressive, but they are nice. And the soundtrack is really nice.
But that's just it, the game boils down to two types of levels. Collect resources from asteroids and fight against enemy waves.

Unfortunately become annoying and repetitive, without great sense of progression or continuity.. I hate everything about this game . was fun at first but turned out to be hard. you must own a controller so the game gets easier to play.. I love these action games.

Heckabomb is a twin stick shooter - xbox360 controller is best

The game alternates between a score stage, where you have to collect salvage from destroying asteroids, to a survival like stage where you are required to 'move' (fly around) a certain distance. At the completion of each stage you can hyperspace out.
You can upgrade weapons, armour, salvage collectors etc. and the game CAN be saved.

Visually its appealling, the gameplay is action\/arcade that is not a bullet hell style game, but one that can be successfully played with some practice.