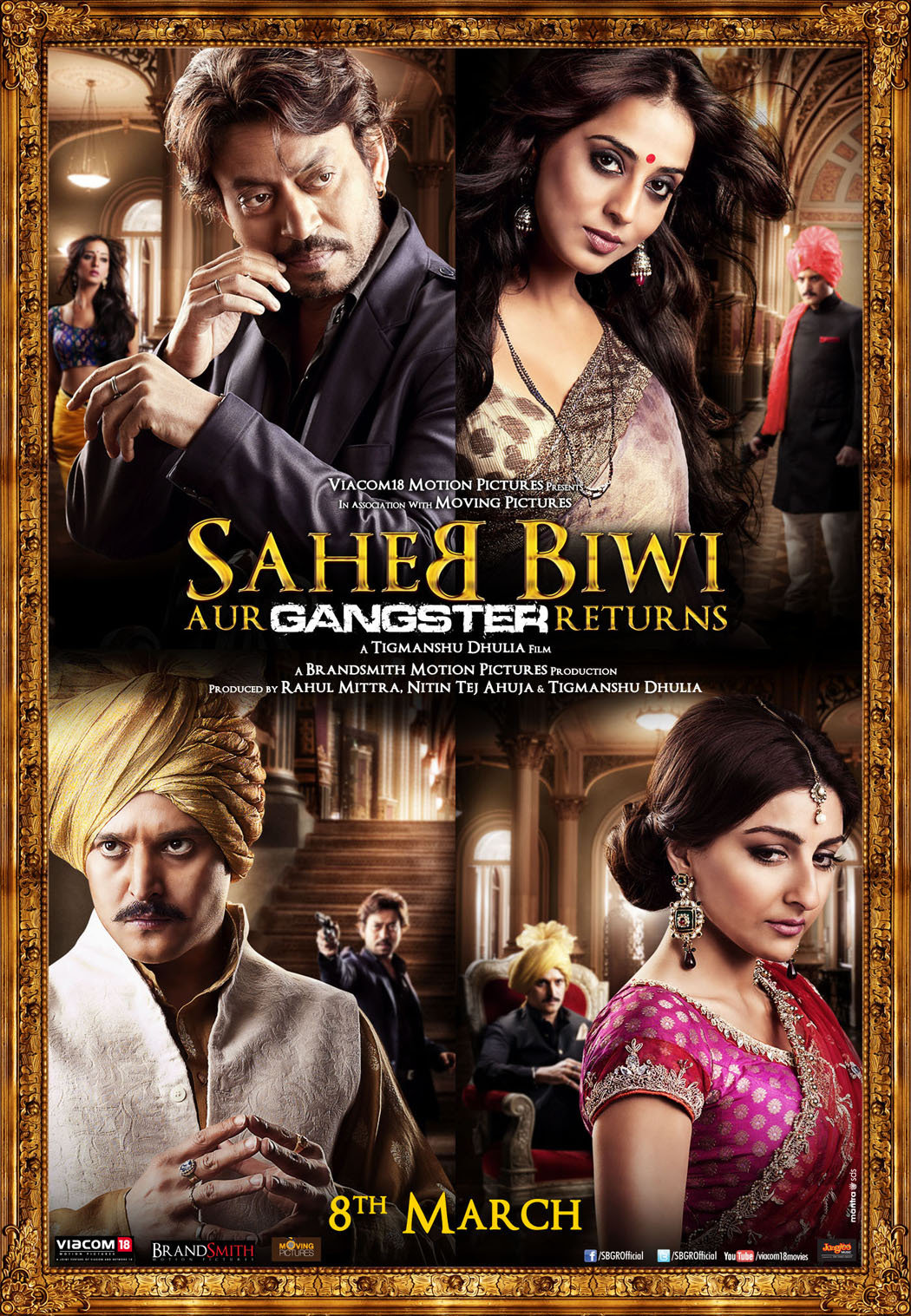 Saheb, his wife, and a gangster who returns to take revenge.
Bolstered by the success and critical acclaim of Saheb Biwi aur Gangster , Director Tigmanshu Dhulia returns with its sequel with much royal paraphernalia, bedroom politics, dialogue-baazi and controlled fireworks. The battle for supreme power continues in the rural heartland with Dhulia splashing his sassy imagination of what happens behind the ramparts of the fading forts.

To give you the plot line, the story moves on where the prequel ended, with the crippled,wheel-chair bound Saheb(Jimmy Shergill) and his alcoholic estranged Biwi/Chotti Rani,Madhavi(Mahie Gill)who is now an MLA , fighting off the assault launched by the revenge-thirsty but penniless Raja Bhaiyya (Irfaan Khan in top-form)whose fiefdom was snatched away by Saheb's ancestors.The fourth dimension to this plot is Ranjana (Soha Ali Khan) who is in love with Raja. Things take a turn when Saheb falls in love with Ranjana and arm-twists his father,Raja Birender(Raj Babbar) to agree to their marriage.

Tigmanshu instills dollops of intrigue to this riveting drama with his dubious and vicious characters which marks his prolificacy as a film- maker and showcases his grasp on the socio-political dynamics.His brand of cinema emanates from the grassroots, the settings are vibrant yet dark, dramatic yet humorous. If there is the Saheb and Biwi playing the bitter antagonists, you also have the self-proclaimed ruler, Raja who accompanies the Biwi in the twin pleasures of bottle and flesh.Like the porn-crazy politician who is still illiterate in operating his laptop and relates himself to a Tomato! Tigmanshu finds humour in tragedy and satire in reality.He gives an ethnic and rustic feel to the dialogues, a life to the otherwise dilapidated royal mansion and an exposure to the etiquettes of the royal trappings. His inclination to poignancy is testimonized by the haunting score of 'Lag Ja Gale' which forms a metaphor to the characters' emotional hollow.

SBAGR is indeed performances galore.Improving with every outing by leaps and bounds, Jimmy shergill is in dazzling form who portrays angst, his animosity towards his wife and the egoistic evil with perfect flourish. As the seductive Chotti Rani,Mahie not only looks ravishing in chiffons but also gives her character the required impetus to depict her yearning for love through her drunken drawl.Irfaan Khan is the Betaaj Badhshah of this enterprise!He displays an array of emotions with so much of conviction that you crave "once more ! once more!".Soha Ali plays her part with good degree of sophistication and she provides an interesting counterpart to Biwi's character. Raj Babbar is his usual charismatic self while Rajeev Gupta as the politician is superbly impressive!

I go with 4 out of 5 for Tigmanshu Dhulia's Saheb Biwi aur Gangster Returns. As the game of chess gets chequered,we are in for an explosive interplay of love, lust and betrayal.Don't miss. 'Saheb Biwi Aur Gangster Returns' is a fine woven drama in pure Tigmanshu Dhulia's style and definitely a must watch. The screenplay is humorous, serious, erotic, revengeful & dramatic at the same time. The first half of the movie is good, though second half loses its momentum. The climax is little bit unexpected and should be, neither it would have been just a remake of its first part 'Saheb Biwi Aur Gangster'. O.o

You'll feel that you are watching some old classic cinema in between the modern gangsterism. Good performance by all, i.e. Jimmy Sheirgill, Mahie Gill, Irrfan Khan, Soha Ali Khan, but one more time Irrfan is the best. Hats off the writer(Again Tigmanshu) for the super fabulous dialogues, you cannot easily forget them like me. ;)

Be aware it's not 'High speed Bullet train' but a 'Tamancha on Bicycle' ; so commercial movie viewers, please stay away.

Rating is above average but not more than 7 due to a few weak scenes. :)