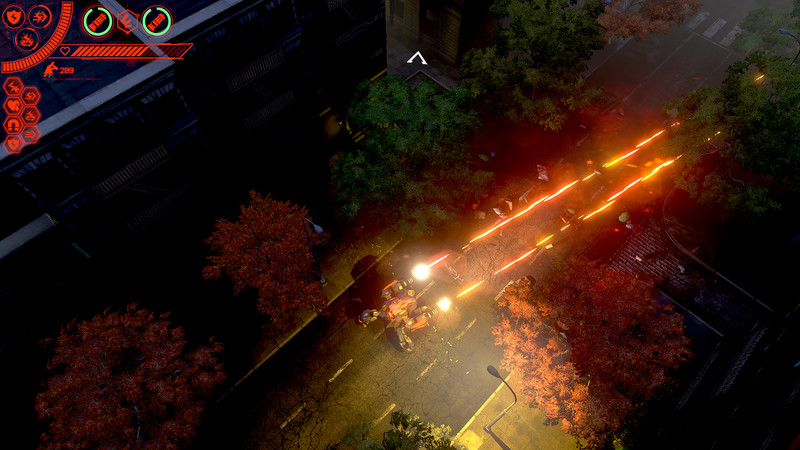 VALA is a frantic top-down shooter where you remotely pilot an endless supply of mechs from your ocean carrier offshore of the apocalypse, fighting through the llama hordes to take down The Llamanati.

How the game works

Take down llama scum with your special abilities 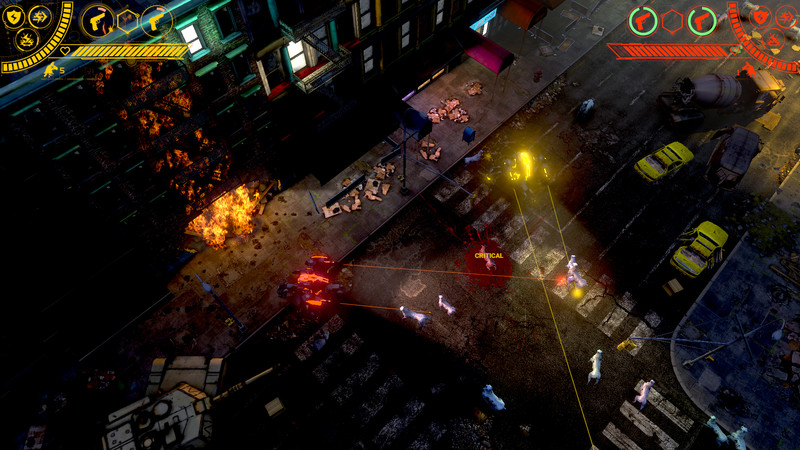 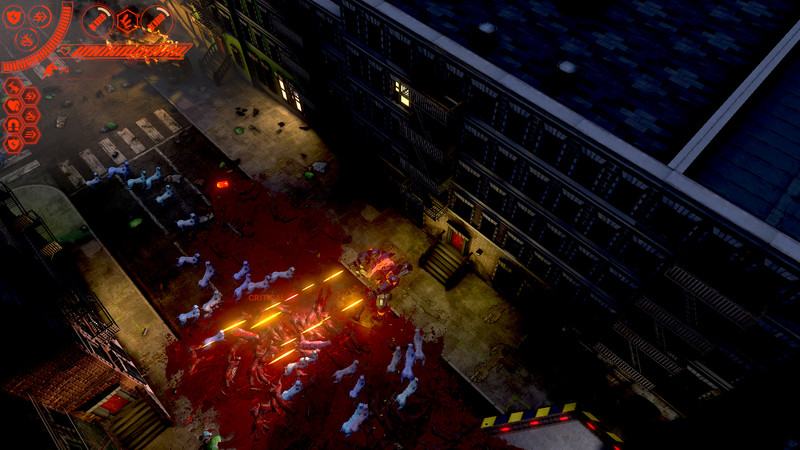 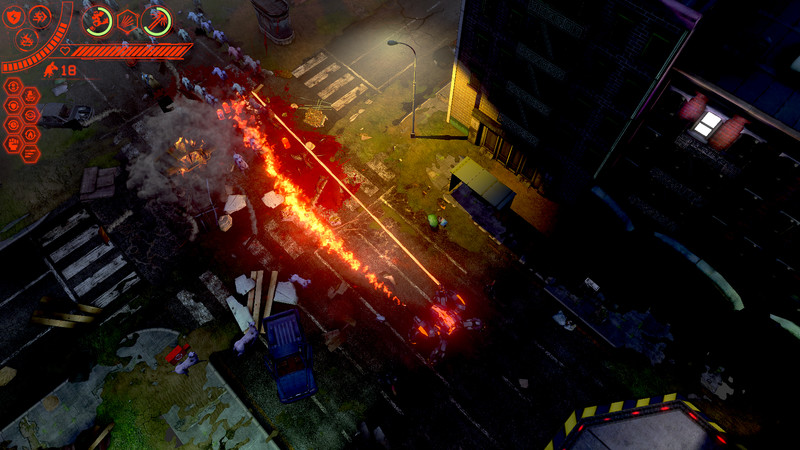 
you guys srsly need to work on your weapon types and the core shooter flow. there is no gameplay around regening your HP and so far the weapon types are quite dull. the flow of the game just gets a bit obstructed by the fact that the only way to regen energy is to kill and there is no way to regen hp (at the start atleast).

also your default controls are not so comfortable (I didnt use dash at all since it is on middle mouse button - how do you expect me to fire from both weapons and press the 2nd mouse button?) Yeah - i could change my weapon controls - but having bad default weapon controls is not a great idea.

also you should work on your aiming controls - you have a limited distance you can draw your cursor and that fells really off and so far the default mouse sensitivity feels RLY uncomfortable, add that to the fact that the camera rolls around like mad (yeah it looks funky at start, but later starts to get annoying)

the llama theme and the pun density setting rly made my day. at first it was cringy af, but after 10 minutes i got hooked.

visuals are nice. not the problem spot of the game.

if you want any detailed tips on twin-stick top-down game design you can pm me. i happened to work on a twin stick shooter myself atm and could share some insight.. 10\/10 solid game, pure llama slaughter satisfaction. There's nothing that hits my llama murdering needs like this game. Every person who believes llamas are pure evil will get their tinfoil hats after playing this game for 10 minutes. Let the llama murder commence #llamanatiMustFall. I never knew killing Llama's could be so fun. Better drop out of school so that I can become a pro.. I don't like this game very much.

It has a fun concept, and is very self-aware of it's cheesy humor. Visually, it looks nice, but it is a bit repetitive (more on that later).

The shooting is just meh. You have two guns to manage, so the aiming is slightly "off" since the weapons aim slightly to the left/right of where you are aiming. The weapons themselves are fun, and using them a certain amount unlocks new options. You have pistols, machine guns, lasers, freeze rays, missiles (some homing), grenades, etc. Good stuff. There is even a hose, which basically just keeps the llamas at bay. The whole setup is ripe for creating an effective "build" of two weapons. However, every weapon requires reloads, and the reload time is often an eternity. Personally, I'm not a fan of the reloading (as it exists).

The worst is the fact that the llamas are faster than you, it's nearly impossible to kite and shoot them. In some of the more claustrophobic environments it can really be a pain.

My biggest issue is that the moment to moment movement and shooting just don't feel good.

You do have a dash, a slam (which is great), and a shield. The dash is kind of limp, and while it can kill llamas, it isn't very effective. On top of that, they all use energy, which drops from killed enemies. I feel like they've increased the drop rate, but it's just another annoyance IMHO. I would rather have had cooldowns. Plus, when you have the shield active, you can't pick up energy. Sometimes the effect persists for a bit after you turn it off (or so it seems), which is especially annoying.

You also have a single health bar (no health pickups) and you get perks from time to time. The droprate was all over the place and none really felt like game changers. There are unlocks here, so perhaps the good stuff is later.

My last session ended in a lab area. I was supposed to find a scientist? I think, and it was even pointed out to me. However, the area you're in was bland and everything was samey hallways and I had no clue where to go. I was low on health, and the white llamas on the white floor were chipping me down. I eventually succumbed to the llamapocalypse after running out of energy with my shield. I did not feel like going for another run.

There are more zones after the first, but I haven't seen them.

Some people may enjoy the pace, I don't think I do. Maybe it's better in co-op, but you'll need some friends and controllers.

Gave it another shot. Controller is much better. The lab is a piece of♥♥♥♥♥♥maze. Everthing looks the same and it just doesn't make any goddamn sense. It reminds me of the sewer maze in Fester's Quest, only worse.

I think I finally found the exit, but I was spent. Cramped, llamas ♥♥♥♥♥♥♥♥ out of every door and hole, and that stupid announcer lady screaming "Forget about the llamas!!" "Hurry Up". What the ♥♥♥♥ do you think I'm trying to do?. To me, Vicious Attack Llama Apocalypse<\/i> was what Tesla Vs. Lovecraft<\/i> should have been.<\/b> Yes, they are different games at the core, but let me explain.

What I like about VALA<\/i> is that it's a modernized twin-stick wave fighter.<\/b> It's 'room' based and not necessarily wave based. This slight nuance means all the difference. It doesn't feel so 'dumb' and thoughtless. It also has rogueish elements that add a nice layer of complexity to help combat the braindead act of fighting waves. The humor and polish are great (seriously, those llama puns are nuts). We have four player local co-op. We have metagame unlockables that make you stronger over time and add more variety. And most of all - it's really fun and addicting.<\/b> Sometimes I even do runs just for the fun of it, and not necessarily with any particular goal in mind.

The only downsides I can mention are that I wish it could run on a toaster, and I'm not sure how long the whole game is by looking at unlocks. I will also mention that this game is difficult.<\/b> Where Tesla Vs. Lovecraft<\/i> had issues with the begining game being super easy and the endgame impossible, VALA<\/i> seems to have a consistent 'rogue' standard of difficulty. You will struggle.<\/b> Thankfully there is a nice layer of strategy available with regards to hoarde management. That's what will keep me playing.

Pros:<\/b>
+Fantastic humor and polish
+Great twin-stick hoarde management strategy with satisfying abilities (using that stomp at just the right moment!)
+Fresh hybrid of twinstick wave fighter with room-based rogueish elements
+The metagame unlock system is refreshing and fun; it forces you to constantly try new weapons
+While I'm not sure how much content there is - it seems to merit the asking price
+Four player local play would be bananas

Cons:<\/b>
-Won't run on a toaster
-Get ready to struggle

I'm pleasantly surprised with VALA<\/i>.<\/b> From early videos, I almost decided to not pick this up last minute. Glad I did. I think it's worth full price.. 10\/10 solid game, pure llama slaughter satisfaction. There's nothing that hits my llama murdering needs like this game. Every person who believes llamas are pure evil will get their tinfoil hats after playing this game for 10 minutes. Let the llama murder commence #llamanatiMustFall